You are here: Home / Trend / Trend Spotting at Maison & Objet 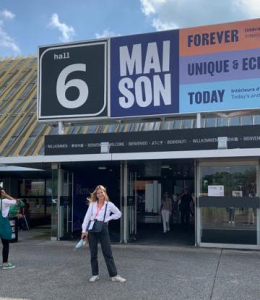 Those who are in-the-know have long considered the Maison & Objet trade fair unmissable. The Trend Curve™ agrees. So, when the new edition, which returned to Paris September 9 – 13 was announced, I made plans to represent The Trend Curve team at the fair. In my first trade-fair assignment focused completely on home furnishings, my assignment was to investigate the newest tendencies in decoration, design, art and living. Four important trends stood out: Sustainability and Handicraft, Japandi, Contemporary Contrast and Cottagecore. 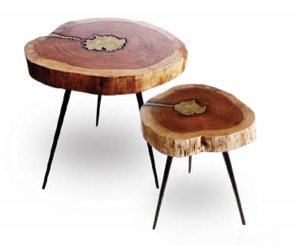 Maison & Objet exhibitors did not hold back when it came to sustainability. Reference to this still-surging macro-trend were everywhere. Furthermore, joining eco-friendly materials with handcrafted touches proved essential for many brands, including Blanc D’Ivoire, Best Before and ADM France Angel Des Montagnes, where a tree-trunk slice, made into the top of a side table, was detailed with gold metallic.

There were many other products in which sustainability and handicraft combined. Lighting maker Flam & Luce topped a rectangular piece of unfinished aged oak with a light bulb, resulting in a new portable piece called Taboo. The oak, this company says, “already has a story to tell.” Jardiland infused their bent-bamboo accent furniture, made from natural, undyed materials, with a similar sensibility.

An upholstered chair from FUSE Home featured cane sides. Baskets and pendant lamps, made of woven grasses or strip rattan, reinforced the sustainable/handcrafted story. The same was true of accent tables crafted from light, unstained wood and marble serving boards, in a variety of colors. However, not every eco-friendly piece used natural materials. Case in point: Zuiver’s new desk table. Designed in collaboration with The Good Plastic Company, this desktop was fashioned from recycled plastic camera spools. The absence of additives in the recycling process means the plastic surface itself can be reused, making this piece fully circular.

In addition to plastic, recycled wood and cane were used to create all-new furniture. At the same time, several stands featured sustainable and durable materials teamed with other raw materials such as ceramic, concrete and oil-treated wood. Envy Lighting, who created eco-friendly lampshades, told this story best. 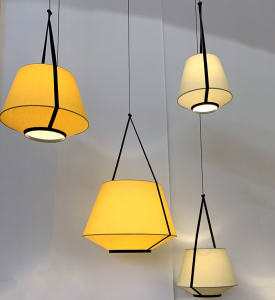 Another growing trend at Maison & Objet was Japandi style. The Japandi trend mixes Scandinavian and Japanese elements to create an uncluttered, functional atmosphere. Informed by a “less is more” philosophy, the shapes and colors become synonyms of aestheticism, simplicity and minimalism.

Indeed, motifs were plain and simple. The newest shapes favored circular silhouettes, including those meant to suggest the rising sun. Surface designs, when they appeared, favored traditional repeats such as waves and fish scales, as well as geometrics reminiscent of origami folding, and small-scale florals.

The palette included typical blue-and-white duos, plus black. More interesting hues leaned toward warmth, creating a casual and comforting mood via colors with names like terre brulée, terracotta and mustard. However, those trend-inspired hues were generally used in proximity to natural and neutral tones such as grey, black, nude and white.

Warm and natural colors could also be combined with a 70s throwback, Yves Klein blue, and with lavender, most recently on-trend about five years ago. Broste Copenhagen showed both hues well in textiles, ceramics and glass, though many other vendors also featured them. Consider both emerging hues to be directional.

From bamboo to sheepskin, the Japandi trend is also known for texture and materials. Some fabrics, like those woven with chenille yarns, had plenty of depth, like the toss pillow shown at Ferm Living. Ceramic and porcelain vessels could be glossy and smooth, or rough and pebbly, like the vases at 101 Copenhagen. Reactive glazes added visual texture to simple tableware shapes at ASA Selection.

Paper, including cardboard, appeared in pendant lighting, sometimes in lantern-inspired shapes. The look of lanterns also ventured beyond this material. Sisal and natural grasses were common. Lines of black metal created more contemporary versions at Forestier when a single, dangling tassel punctuated the form.

The Contemporary Contrast trend showed that opposites, especially in shape and form, can attract. Juxtaposing the bold look of overstuffed, inflated or bulky elements with thinner and more-delicate ones made this style really stand out. Sometimes these different sensibilities combined in a single piece. In other cases, they appeared in the same vignette.

The most two common materials seen at the fair were sheepskin and marble. Flamant Jacques was one of the numerous brands to use faux fleece on their armchair or on their coffee table. Other brands joined in. These materials were available in hues such as white, black, mustard and nude. Other materials were used for this trend, including colorful velvety textures, cane, dark wood and shiny brass.

Of all the trends seen in Paris, Cottagecore was the most established. Typically found on sheets, cushions and dishes, it often relied on surface designs to tell the story. Allover florals made a dominant statement. Many of them came in a small scale that added nostalgic overtones, however, medium scale also appeared, along with a few oversized versions. Thin stripes played a supporting role. So did plaids with slightly imperfect characters that gave them a hand-crafted quality. Accents including animal-skin prints and marble designs updated the trend.

Key colors favored a mid-tone palette with just a touch of complexity. Rosey pink and blush looks, soft rusted tones, pearl grey, warm blue and mustard yellow were featured. That said, it was shades of green that really caught the eye, suggesting a larger role for this color family going forward.