You are here: Home / Trend / Updating Neutrals for Christmas 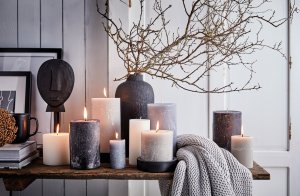 When the pandemic began, the black-and-white duos that had been so popular just a year or two before dropped off fast. So did angular geometrics. That’s because—suddenly—high contrast and hard-edged motifs felt too bold for a population that had been whipsawed by Covid. 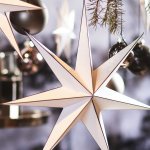 As high contrast looks took a step back, they were freed up to evolve into a softer character that is a better match for today’s emotionally raw consumers. As a result, when black-and-white stories are found today, the look is far less edgy. This is true, even when the theme they appear in is contemporary, which is often the case. This evolution is being accomplished in subtle, yet important ways:

With a personality that is far less graphic than in the past, this classic duo feels not only updated, but also more usable.

Also directional on the neutral front: brown plus white. This combination benefits from an earthy personality that alludes to natural materials and a sustainable point of view. These qualities help differentiate brown/white from white/gold metallic pairs, which are now considered basic for Holiday trim and décor. That said, brown is not so far removed from several gold variations, including antique gold and bronze gold, that light and mid-tone values such as taupe and tan, or even a wood-tone or craft paper shades, cannot work as tonal variations on gold.

Shades of brown with white from Demdaco

Riding a wave of popularity, brown shades could easily replace gold metallics, and they will. Yet, they can also be used to enhance white-and-gold stories. Doing so provides a transition to a dominant role for browns in Holiday collections for 2022 and beyond. Keep in mind that browns have been the on-trend neutral for everyday décor since they replaced grays about two years ago. It has taken longer to achieve the same status for Holiday products. Now that this is beginning, those browns are demanding to be showcased. White and brown combinations (and white/brown/gold ones) are poised to provide exactly that.

Natural, yet luxurious in brown/white/gold at Raz Imports

Browns and white get a touch of gold at House Doctor