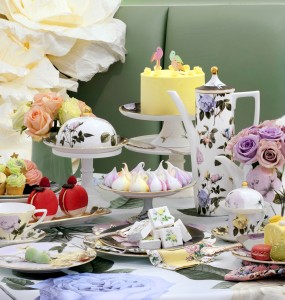 Wallpaper florals have been off the trend radar—and considered too traditional for today’s modern consumer—since their 1980’s heyday. But earlier this year, English floral designs threw out hints that a comeback is in the future when a few choice versions popped up at Ambiente in Frankfurt and Maison & Objet in Paris. These modernized wallpaper looks were oversized, colored differently than in the past, done in open-and-airy layouts and as inclined toward contemporary style as they were toward new-traditional sensibilities. They appeared on tableware, cushions and upholstery.

Here are some of the wallpaper florals debuting at High Point’s semi-annual furniture market in April. They come from CR Laine, Pearson, Taylor King and Wesley Hall.